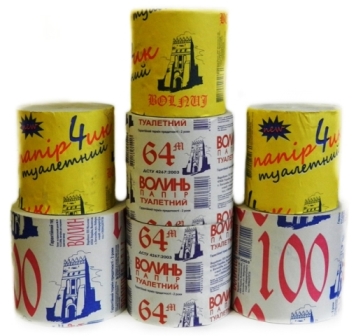 Toilet paper today - it is a necessity, without which nothing.

The first toilet paper was made from silk in China in the 2nd century AD.

10th place: People living in coastal areas are often used for their needs shells of mussels. Residents of Hawaii used the shell of the coconut.

9th place: In ancient Rome, in public toilets has always been a stick with a sponge, standing in a bucket of salt water. Rich people employed rose water and soft wool.

8th place : Islamic rules state that at the beginning it is necessary to wipe clods of earth and stones , washed away with water and already , then wipe with a cloth . Therefore, many godly men in their turbans are small pieces of land and water containers.

7th place : In the Arab countries and India to this day the most popular is the left hand . Undoubtedly , then wash hands thoroughly . Some Arabs consider the use of toilet paper macabre tradition because they believe that using it is impossible to achieve absolute purity.

6th place : Formerly a French invention - bidet, used by both women and men . But during World War I , British and American troops met these inventions in brothels , and they decided that the bidet is designed just for women. Therefore, men do not enjoy them more . 5th place : The first American settlers , as evidenced by the annals of toilet progress using corn cobs.

4th place: In the XIX century in rural America became popular catalog of Sears. People hung it on a nail, and they turned out 100 pages of good toilet paper. In the 30 years of the twentieth century, the catalog had lost its popularity, as began to be published on a quality thick paper.

3rd place: Lord Chesterfield joked: "You must always wear a cheap volume of poems, sitting on the pot to entertain yourself, and then find a good use for read". However, today released a special "dressing" of the book. It turns out that most of the modern busy people read it in the toilet.

2nd place: In England, the first toilet paper produced in 1880. It is not sold in rolls and square boxes. This paper was very rough - it was a British prefer today. By the way, before people were ashamed of toilet paper. The Englishman William Alcock, the first time it curled into rolls, called them "Paper curlers."

1st place: In 1944, the US government presented an award for patriotism company Kimberly-Clark, which is distinguished supply of toilet paper for the soldiers who fought on the fronts of the Second World War. Toilet paper is still in good stead once the US Army. In 1991, soldiers used it to camouflage tanks during "Operation Desert Storm" in the Persian Gulf.

Technology of production of toilet paper

How to make toilet paper , or 65 magic meter

We are looking for cooperation partners in different regions of Ukraine and abroad. We look forward to long-term, partnership. Everyone interested in cooperation send product samples.

The advantages of our products

We appreciate your time

The price depends on the number of products that you order

Free within Lutsk. For Ukraine and abroad by arrangement